In part 3, you took an app you wrote in part 2, and defined how it should run in production by turning it into a service, scaling it up 5x in the process.

A swarm is a group of machines that are running Docker and joined into a cluster. After that has happened, you continue to run the Docker commands you’re used to, but now they are executed on a cluster by a swarm manager. The machines in a swarm can be physical or virtual. After joining a swarm, they are referred to as nodes.

Swarm managers can use several strategies to run containers, such as “emptiest node” -- which fills the least utilized machines with containers. Or “global”, which ensures that each machine gets exactly one instance of the specified container. You instruct the swarm manager to use these strategies in the Compose file, just like the one you have already been using.

Swarm managers are the only machines in a swarm that can execute your commands, or authorize other machines to join the swarm as workers. Workers are just there to provide capacity and do not have the authority to tell any other machine what it can and cannot do.

Up until now, you have been using Docker in a single-host mode on your local machine. But Docker also can be switched into swarm mode, and that’s what enables the use of swarms. Enabling swarm mode instantly makes the current machine a swarm manager. From then on, Docker runs the commands you execute on the swarm you’re managing, rather than just on the current machine.

Set up your swarm

A swarm is made up of multiple nodes, which can be either physical or virtual machines. The basic concept is simple enough: run docker swarm init to enable swarm mode and make your current machine a swarm manager, then run docker swarm join on other machines to have them join the swarm as workers. Choose a tab below to see how this plays out in various contexts. We use VMs to quickly create a two-machine cluster and turn it into a swarm.

VMS ON YOUR LOCAL MACHINE (MAC, LINUX, WINDOWS 7 AND 8)

You need a hypervisor that can create virtual machines (VMs), so install Oracle VirtualBox for your machine’s OS.

Note: If you are on a Windows system that has Hyper-V installed, such as Windows 10, there is no need to install VirtualBox and you should use Hyper-V instead. View the instructions for Hyper-V systems by clicking the Hyper-V tab above. If you are using Docker Toolbox, you should already have VirtualBox installed as part of it, so you are good to go.

You now have two VMs created, named myvm1 and myvm2.

Use this command to list the machines and get their IP addresses.

Note: you need to run the following as administrator or else you don’t get any resonable output (only “UNKNOWN”).

Here is example output from this command.

INITIALIZE THE SWARM AND ADD NODES

The first machine acts as the manager, which executes management commands and authenticates workers to join the swarm, and the second is a worker.

You can send commands to your VMs using docker-machine ssh. Instruct myvm1 to become a swarm manager with docker swarm init and look for output like this:

Always run docker swarm init and docker swarm join with port 2377 (the swarm management port), or no port at all and let it take the default.

The machine IP addresses returned by docker-machine ls include port 2376, which is the Docker daemon port. Do not use this port or you may experience errors.

Docker Machine has the option to let you use your own system’s SSH, if for some reason you’re having trouble sending commands to your Swarm manager. Just specify the --native-ssh flag when invoking the ssh command:

As you can see, the response to docker swarm init contains a pre-configured docker swarm join command for you to run on any nodes you want to add. Copy this command, and send it to myvm2 via docker-machine ssh to have myvm2 join your new swarm as a worker:

Congratulations, you have created your first swarm!

Run docker node ls on the manager to view the nodes in this swarm:

If you want to start over, you can run docker swarm leave from each node.

Deploy your app on the swarm cluster

The hard part is over. Now you just repeat the process you used in part 3 to deploy on your new swarm. Just remember that only swarm managers like myvm1 execute Docker commands; workers are just for capacity.

Configure a docker-machine shell to the swarm manager

So far, you’ve been wrapping Docker commands in docker-machine ssh to talk to the VMs. Another option is to run docker-machine env  to get and run a command that configures your current shell to talk to the Docker daemon on the VM. This method works better for the next step because it allows you to use your local docker-compose.yml file to deploy the app “remotely” without having to copy it anywhere.

Type docker-machine env myvm1, then copy-paste and run the command provided as the last line of the output to configure your shell to talk to myvm1, the swarm manager.

The commands to configure your shell differ depending on whether you are Mac, Linux, or Windows, so examples of each are shown on the tabs below.

Run docker-machine env myvm1 to get the command to configure your shell to talk to myvm1.

Run the given command to configure your shell to talk to myvm1.

Run docker-machine ls to verify that myvm1 is now the active machine, as indicated by the asterisk next to it.

Deploy the app on the swarm manager

Now that you have myvm1, you can use its powers as a swarm manager to deploy your app by using the same docker stack deploy command you used in part 3 to myvm1, and your local copy of docker-compose.yml.. This command may take a few seconds to complete and the deployment takes some time to be available. Use thedocker service ps  command on a swarm manager to verify that all services have been redeployed.

You are connected to myvm1 by means of the docker-machine shell configuration, and you still have access to the files on your local host. Make sure you are in the same directory as before, which includes the docker-compose.yml file you created in part 3.

Just like before, run the following command to deploy the app on myvm1.

And that’s it, the app is deployed on a swarm cluster!

Note: If your image is stored on a private registry instead of Docker Hub, you need to be logged in using docker login  and then you need to add the --with-registry-auth flag to the above command. For example:

This passes the login token from your local client to the swarm nodes where the service is deployed, using the encrypted WAL logs. With this information, the nodes are able to log into the registry and pull the image.

Now you can use the same docker commands you used in part 3. Only this time notice that the services (and associated containers) have been distributed between both myvm1 and myvm2.

You can access your app from the IP address of either myvm1 or myvm2.

The network you created is shared between them and load-balancing. Run docker-machine ls to get your VMs’ IP addresses and visit either of them on a browser, hitting refresh (or just curl them). 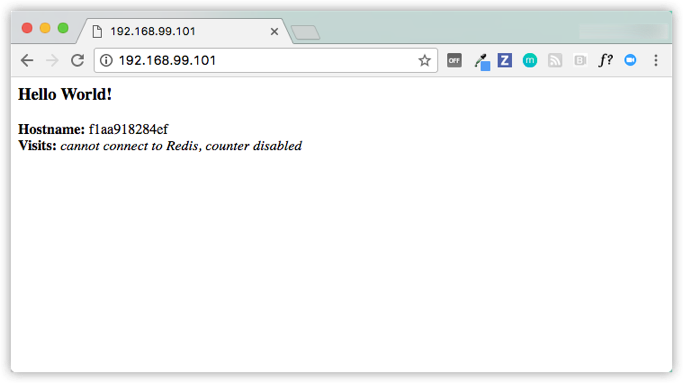 There are five possible container IDs all cycling by randomly, demonstrating the load-balancing.

The reason both IP addresses work is that nodes in a swarm participate in an ingress routing mesh. This ensures that a service deployed at a certain port within your swarm always has that port reserved to itself, no matter what node is actually running the container. Here’s a diagram of how a routing mesh for a service called my-web published at port 8080 on a three-node swarm would look:

Keep in mind that to use the ingress network in the swarm, you need to have the following ports open between the swarm nodes before you enable swarm mode:

Iterating and scaling your app

From here you can do everything you learned about in parts 2 and 3.

Scale the app by changing the docker-compose.yml file.

Change the app behavior by editing code, then rebuild, and push the new image. (To do this, follow the same steps you took earlier to build the app and publish the image).

In either case, simply run docker stack deploy again to deploy these changes.

You can join any machine, physical or virtual, to this swarm, using the same docker swarm join command you used on myvm2, and capacity is added to your cluster. Just run docker stack deploy afterwards, and your app can take advantage of the new resources.

You can tear down the stack with docker stack rm. For example:

Keep the swarm or remove it?

You can unset the docker-machine environment variables in your current shell with the given command.

On Mac or Linux the command is:

On Windows the command is:

This disconnects the shell from docker-machine created virtual machines, and allows you to continue working in the same shell, now using native docker commands (for example, on Docker Desktop for Mac or Docker Desktop for Windows). To learn more, see the Machine topic on unsetting environment variables.

If you shut down your local host, Docker machines stops running. You can check the status of machines by running docker-machine ls.

Here’s a terminal recording of what was covered on this page:

In part 4 you learned what a swarm is, how nodes in swarms can be managers or workers, created a swarm, and deployed an application on it. You saw that the core Docker commands didn’t change from part 3, they just had to be targeted to run on a swarm master. You also saw the power of Docker’s networking in action, which kept load-balancing requests across containers, even though they were running on different machines. Finally, you learned how to iterate and scale your app on a cluster.

Here are some commands you might like to run to interact with your swarm and your VMs a bit:

Covid 19 vaccine Registrations for 18+ in India

How to Connect MySQL in UiPath

About Us
Courses
Events
Blogs